These FAQs have come from questions asked during the round of community meetings held in February at Epiphany. These open meetings were an opportunity for community members to ask questions, make suggestions and get some more information as we consider the future together. END_OF_DOCUMENT_TOKEN_TO_BE_REPLACED 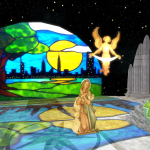 On Sunday 17 December at noon, we celebrated the traditional Festival of Nine Lessons and Carols at the Cathedral. This popular service was well attended as usual, and a variety of voices was heard as volunteers read the nine passages that tell the story of Jesus’ birth from the moment it is foretold in the book of Genesis in the Bible. Each reading was illustrated with live props by our churchwarden.

After the service, we had a lively social time on the benches outside the cathedral. Some snaps from the occasion can be seen in this online album.

This Sunday at noon (Christmas Eve), a short service for the Fourth Sunday in Advent will be followed by the return of the Posada to Epiphany Island and all are welcome to join us for this.

On Christmas Day, there will be a service of prayers and readings at noon in the chapel.

In a rare treat for the ears and eyes, a perfect marriage of sound and architecture, the 6th of December 2015 saw Epiphany Island hosting a live concert by the Irish composer and Second-Life performer, Dainial.

Dainial’s extensive composition, “The Found Dream of Childhood”, was first heard in The Anglican Cathedral of Second Life in December 2014. It was inspired by and written for the Cathedral, but Dainial’s return performance on this occasion was marked with poignancy as a commemoration of his father.

Slipping back and forth between English and Irish language, Dainial warmly greeted the avatars, faces old and new, who had gathered in the pews to hear him. He shared a little of the childhood memories of his father and explained how the work was also originally accompanied by a reel of 8mm film shot by Conradh na Gaelige, an organisation dedicated to the preservation and promotion of the Irish language, and featuring three generations of Dainial’s family. Conradh na Gaelige were trying to hold back the declassification of towns as “gaeltachts” (places where Irish was the first language spoken as opposed to English).

The scene was set: Dainial’s avatar standing alone with a saxophone on the compass-rose pavement in front of the altar, lit by virtual moonlight through the high windows and flanked by a pair of keyboards. Beginning, very quietly with layers of of synthesised sound, he built a structure and gave it texture, then furnished it with the haunting effect of his saxophone, taking the listeners on a dreamlike journey over the next half an hour. END_OF_DOCUMENT_TOKEN_TO_BE_REPLACED

This year the Anglican Cathedral of Second Life marks the season of Advent and meditates on its meaning in our annual Posada. Figures of Mary and Joseph left the Cathedral after the Sunday service on the 29th November to go on a journey about Second Life. They will return to the Cathedral on Christmas Eve, where they will (of course) be joined by a tiny Jesus in the manger on Christmas morning.

Some 23 members and friends of the Anglicans of Second Life community are participating by playing host to Mary and Joseph during the festival. Each day, the figures change hands at their location in a short ceremony, which ends with the words, “May they be a symbol to you of taking the Lord Jesus into your heart”. They then go to spend a day and a night with their new hosts (which is actually six days and nights under Second Life’s four-hour day cycle).

This moment of exchange is a social occasion too. Friends old and new gather in-world to see Mary and Joseph and experience a part of Second Life that they wouldn’t normally see. It could be anywhere on the grid, like somebody’s second-life home or garden, a box in the sky, a campus, or the sanctuary where a community worships.  The figures can also be visited at any time, wherever they have got to in their travels.

The journey has begun. On Sunday, the Posada was kicked off at the Cathedral and went to Serenity Mountain Trails, where Mary and Joseph settled into a prepared space at Klaus’ log cabin. Guests were treated to mulled wine and encouraged to don a santa hat for the occasion. Ever the child at heart, Charlie12string Lax sat himself on the rocking reindeer, our mermaid churchwarden fixed herself a paddling pool to lie in, and visitors admired a slide show of previous Posadas going back to the first one in 2009.

Mary and Joseph settling in at Serenity Mountain Trails

A steady trickle of visitors came to view the figures over the next 24 hours, as time zones allowed, until it was time for Mary and Joseph to go to a place prepared for them by Charlie at The Shepherd’s Pasture. To the almost deafening noise of sheep, cows and donkeys, we saw the figures safely installed and admired the symbolism of three trees representing the transition from dry and burning at one end of the pasture to green and flourishing where Mary stood with the Saviour in her womb.

An angel appears at The Shepherd’s Pasture

As well as being great fun, the Posada is an opportunity to figuratively show hospitality to the holy family as Christmas approaches. Against the backdrop of war and persecution that has caused the displacement of an estimated 59.5 million people worldwide, the image of Mary and Joseph out on the road is particularly poignant. We remind ourselves that the Advent season is one of great hope, not only retelling how God came to be with us in weakness and vulnerability but also anticipating Jesus’ return to bring final justice to the oppressed and to wipe every tear from every eye. Pixels on a screen our travelling figures may be, but they provide a focus of hope for a diverse community of faith that literally embraces those on whom the sun sets and, at the same moment, those on whom it rises.

To see the Posada and to find out the handover times and where it is going next, you can pick up the latest information from the in-world noticeboard by the entrance to the Anglican Cathedral in Second Life. Click here for a map and teleport.

Second Life, and SL are trademarks of Linden Research, Inc. The Anglican Cathedral of Second Life is not affiliated with or sponsored by Linden Research.
Loading Comments...
%d bloggers like this: